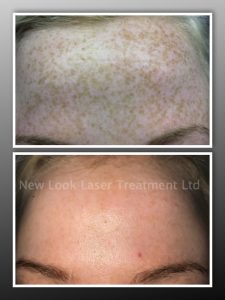 What are pigmented lesions?

How does laser work to remove pigmented lesions?

It is widely recognized that the Q Switched laser and particularly our high end equipment are ideal and effective tools at removing unwanted pigmented lesions and is considered the gold standard. The laser energy pulse, which is fractions of a second in duration, is fired at the pigment. The pigment then absorbs the laser energy causing it to break down. This releases the pigment into the skin so it can be reabsorbed and disposed of by the body’s natural defence mechanisms.

Types of Pigmented lesions that can be removed?

Be aware that you can have minor scabbing in the treatment area for a few days to a few weeks post treatment. We recommend that you treat these with plain Vaseline and keep them covered until healed.

How long do pigmented lesions take to be removed ?

In some cases a single treatment can remove 100% of the pigment however this always depends on the depth and size of the lesion and the amount of melanin pigment present etc.